A World in a Grain of Sand: The Clairvoyance of Stefan Ossowiecki – Mary Rose Barrington, Ian Stevenson, Zofia Weaver 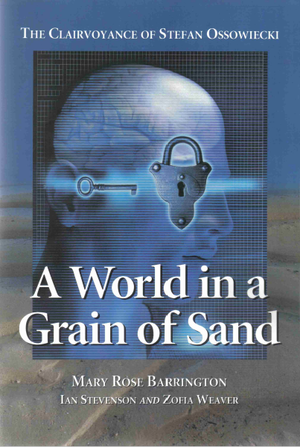 Many people around the world accept the possibility of telepathy or clairvoyance. Very rarely, however, has anyone been able to demonstrate these psychic faculties with enough accuracy and reliability to produce significant results in repeated experimentation. An exception to this was the Polish engineer and industrialist Stefan Ossowiecki. Ossowiecki (1877-1944) is perhaps the most gifted psychic ever to come under the scrutiny of researchers. He demonstrated a range and quality of clairvoyance that no one has exceeded, at least under experimental controls. Equally important, he was eager to learn more about his talent and allowed a variety of researchers to use him in experiments. Anecdotal accounts of his talent abounded, but it was the controlled observations of investigators in experiments conducted in Paris and Warsaw that confirmed his gift. For the first time, this book brings to English-speaking researchers and the public detailed accounts of the crucial experiments carried out with Ossowiecki, which produced compelling evidence of paranormal cognition.

Ian Pretyman Stevenson (October 31, 1918 – February 8, 2007) was a Canadian-born U.S. psychiatrist. As founder and director of the university’s Division of Perceptual Studies, which investigates the paranormal, Stevenson became known for his research into cases he considered suggestive of reincarnation, the idea that emotions, memories, and even physical bodily features can be transferred from one life to another.