Athanasius Kircher: A Renaissance Man and the Quest for Lost Knowledge – Joscelyn Godwin 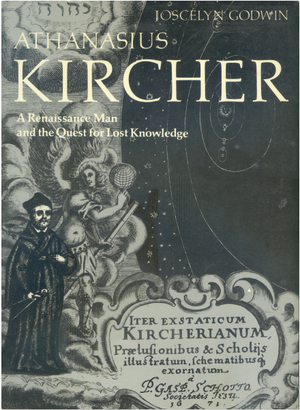 Athanasius Kircher (1602 – 80) stand out as one of the last all-encompassing minds. For this true Renaissance man, the whole world was a glorious appearance of God waiting to be explored. Kircher was a Jesuit and an archeologist, a phenomenal linguist and an avid collector of scientific instruments. He deciphered archaic languages, experimented with alchemy and music therapy, optics and magnetism. Egyptian mystery wisdom, Greek, Cabbalistic and Christian philosophy met on common ground in his work. Kircher’s sumptuous volumes were revered throughout Europe, and his gigantic oeuvre is represented here through striking engravings – most of them reprinted for the first time – together with annotations and an introduction to Kircher’s life and work.

Joscelyn Godwin (born 16 January 1945 at Kelmscott, Oxfordshire, England) is a composer, musicologist, and translator, known for his work on ancient music, paganism, and music in the occult.