The Daimon and the concept of reincarnation in Ancient Greece 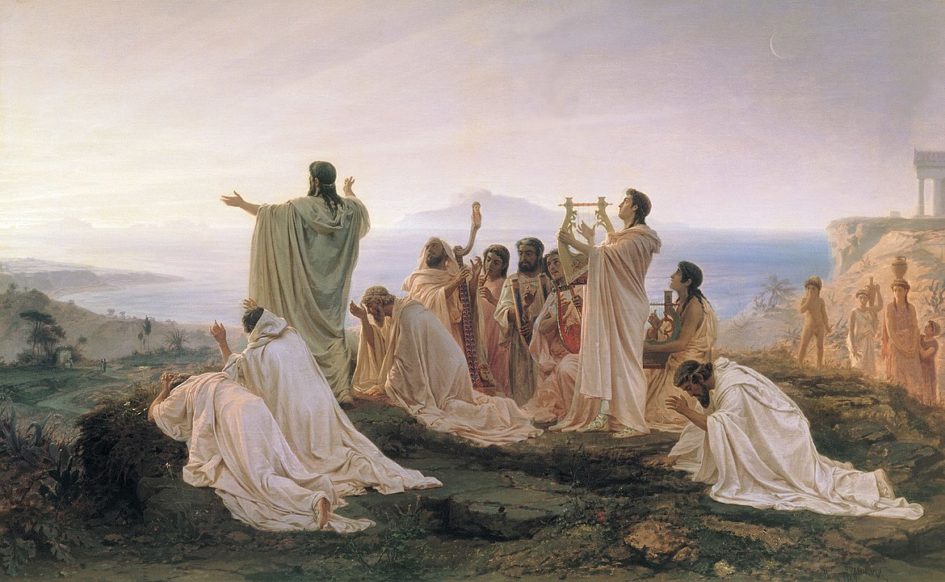 The Daimon and the concept of reincarnation in Ancient Greece

The belief that the soul can be reincarnated many times in as many bodies is not unique to Eastern cults and philosophies, but was also present on the European continent and in the Western esoteric tradition in ancient times. In particular, the belief in the multiple transmigration of the soul, called metempsychosis, was widespread in Hellenic initiatory cults and was passed down especially among the followers of the Orphic mysteries, revealed by the great poet Orpheus after returning from his journey to the Underworld.

Essential to Orphism is the concept of the body and its need to transmigrate until it reaches perfection according to the rules of life made comprehensible by the cult itself. The soul, which the Greeks called δαίμωνand which resided in the heavens, commits a sin and falls from the kingdom of heaven to earth, reincarnating in a body, which it uses to atone for its guilt. At death, the δαίμων transmigrates and reconstitutes itself in another body that may not even be that of a human being depending on the choices made in life.

In Greek mythology, the δαίμων is an entity with an intermediate nature between gods and men, which helps to overcome the division between them, putting them in communication. Of uncertain etymology, the term is perhaps related to the verb daiomai, meaning “to divide”, “to distribute”, with the meaning of one who “distributes, or assigns, destiny”. The δαίμων is therefore the bearer of man’s potential divinity, but also of his guilt, his Destiny.

Through the need for the soul to purify itself through transmigration over many lifetimes, the goal of Orphism is to achieve final enlightenment and return to its “primitive essence”.

According to the Irish philologist and anthropologist Eric Dodds, even the most ancient Greek shamans, those sages known as magicians, healers and prophets, such as Epimenides, Empedocles and Pythagoras, shared this knowledge of the transmigration of the soul. It was only when reincarnation became established as the destiny of all souls that the vision of guilt, of punishment, became attached to it 1.

The philosopher Empedocles (6th-5th century B.C.) distinguished between the ψυχή, the vital heat which, on the occurrence of death, was reabsorbed by the igneous element from which it originated, and the δαίμων, a kind of “occult self” that persisted through the various reincarnations. While perceptions and thought were mechanically determined by the ψυχή, the δαίμων was the bearer of man’s potential divinity, but also of his guilt 2.

A disciple of Pythagoras and initiated into the Orphic doctrines, Empedocles condemned ritual animal sacrifices because, according to the Orphic tradition, they lead man to regress in his spiritual evolution and transmigrate into animal forms. In fact, according to Empedocles, man is a god fallen into matter for having transgressed the moral and physical laws of Nature. In a fragment from the Purifications (D-K 31 B 115), he says:

“It is a vaticinium of Necessity, an ancient decree of the Gods, eternal, sealed by ample oaths: if someone, through his error, contaminates his limbs with blood, or after having erred through the work of Contesa, swears falsely, these, like daimones, who have been blessed with a long life, three times ten thousand seasons go wandering far from the Blessed, being reborn in the course of time in multiple mortal forms, changing the troubled paths of life. For the force of the winds drives them into the sea, and the sea spits them back onto the back of the earth, and the earth against the rays of the shining sun, and the sun still in the vortices of the ether: the one receives them from the other, but they hate them all. And I too am now one of them, exiled from the gods and wandering, for having trusted in the mad contention.”

The concept of transmigration is also reiterated in these fragments:

Covering them with a tunic of flesh unknown to them (fr. 127);

Alas, O unhappy race of mortals, O twice unfortunate, from what contentions, from what groans you were born! (fr. 131);

Out of your senses through grave wickedness, you will never free your soul from tormenting anguish (fr. 140);

With a deep nostalgia for the condition of eternal pre-incarnational happiness, the Fall (ptoma) into matter is seen by Orphism as a condemnation, a “here and now” in a foreign place that does not belong to us. The only hope is the progressive exit from Dinos, the Vortex, breaking the continuous reincarnative cycle and returning to the Island of the Blessed.

But among the first to promulgate and popularise the notion of successive transmigrations of the soul was undoubtedly Pythagoras and his school. Originally from the Middle East, this mathematical philosopher came to know about reincarnation not only through his travels in Egypt, Mesopotamia and the Indies, but also from direct knowledge through the memories of his past lives. Confirmation that Pythagoras was one of the first to promote the concept of reincarnation among the Greeks is given by the Greek historian Diogenes Laertius when he writes:

Furthermore, Herodotus states that the teachings on the transmigration of the soul transmitted to the Greeks came from Egypt:

“The Egyptians were the first to maintain that the soul is immortal, and that it transmigrates, after the death of the body, into another living being, which is itself being born; and that, after having passed through all the terrestrial, aquatic, and winged animals, the soul transmigrates again into the body of a man, the cycle being completed in three thousand years. This theory was then taken up by some of the Greeks, at various times, as if it had been their discovery; I know their names, but do not write them down. 5“

Heraclides Ponticus, a Greek philosopher who lived in the 4th century BC and a disciple of Pythagoras, claimed that the gods had allowed Pythagoras to preserve the memory of his previous incarnations. According to the chronicles, on the occasion of Pythagoras’ visit to the Heraion of Argos, he identified as his own a shield belonging to Euphorbus, son of Pantoos, which he wore when he was killed by Menelaus beneath the walls of Troy. According to the author Heraclides, Pythagoras claimed that, before becoming Euphorbus, he had been Aetalis, son of Hermes and herald of the Argonauts, and had obtained from his divine father the privilege of remembering his life, both on earth in other incarnations and in Hades. After his life as Euphorbus, he had become Hermes, and later Pyrrhus, a fisherman from Delos, and then Pythagoras 6.

According to the Swiss scholar Christoph Riedweg, a classical philologist and Pythagoras specialist, the ban on broad beans, in addition to its ‘totemistic’, sanitary and analogical interpretation, is related to the doctrine of the rebirth of souls7, is attested both in a verse attributed to Orpheus, the symbolic figure behind the Orphic Mysteries, quoted by Heraclides Ponticus who refers it to Pythagoras (“It is the same to eat broad beans and to eat the heads of one’s parents”), and in a fragment of Empedocles who shares the doctrine of the transmigration of souls (“Wretches, absolutely wretches, keep your hands off the fava beans”) that return to earth during the fava bean blossom, when they “come to light from the abodes of Hades”. Many Pythagorean prohibitions, therefore, such as refraining from eating living beings, are always linked to taboos of a totemic nature and on the transmigration of souls.

In the “Dialogues” of Plato, the great initiate and philosopher of the 5th century BC, the immortality of the soul is associated with its ability to transmigrate into many living beings. Those who have not succeeded in freeing themselves from material burdens cannot ascend to the higher, purer spiritual planes and are therefore dragged down into the visible world, imprisoned in another body 8.

In the myth of Er the Armenian, a story also described by Plato in his “Republic”, the philosopher gives a specific description of post mortem and reincarnation as an act of immutable destiny chosen by the soul itself. The story tells of a valiant warrior from Pamphylia named Er who fell in battle. Twelve days after his death, his body is collected and taken to the stake to be burned, but just before they set fire to it, the young man awakens and tells what he has seen in the afterlife. Once out of his body, the warrior set off with many other souls towards four passages, through which the souls ascended to heavenly dimensions or descended underground depending on their good or bad deeds during their lives. The stay in these places, however, is temporary, lasting about a thousand years for each soul. After seven days in that place, Er together with other souls were made to walk for four days, until they arrived in front of the spindle of Ananke, the spindle of necessity and the axis of the celestial spheres that determines the destinies of men. Under the spindle appeared the three Moirai, daughters of Ananke: Cloto, the spinner, sings the present, Lachesi, the distributor, the past, and Atropo, she who cannot be dissuaded, the future. In the presence of Lachesi, each soul will choose its own δαίμων, not dictated by fate, but by free choice. The three Moirai draw the order of choice of the souls, where each soul is offered a huge number of paradigms of life: lives of animals, of men, of women, of tyrants, successful or unsuccessful, obscure or distinguished. Knowing how to choose a life is fundamental to happiness and well-being on earth. At the end of the day, the souls camp on the bank of the river Lete to drink its waters and forget. Finally at midnight, with an earthquake, the souls are thrown into the vortex of rebirth 9.
Our happiness in this life does not depend solely on the δαίμων that presides over our destiny, but only on our free choice of a good δαίμων, in order to be able to transform ourselves and change our Life and Destiny.

If you are interested in discovering your past lives through a tarological consultation and a medical portrait, thanks to the collaboration with Andrea Nadir Orazi Art, contact us directly here.
For more information on the technique of recovering previous lives, click here.