The Survival of the Pagan Gods: The Mythological Tradition and Its Place in Renaissance Humanism and Art – Jean Seznec 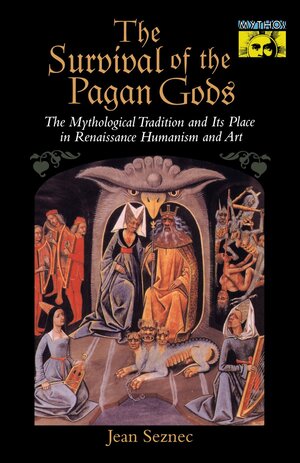 The Survival of the Pagan Gods: The Mythological Tradition and Its Place in Renaissance Humanism and Art – Jean Seznec (1953). Princeton: Bollingen Foundation, 400 p.

The gods of Olympus died with the advent of Christianity–or so we have been taught to believe. But how are we to account for their tremendous popularity during the Renaissance? This illustrated book, now reprinted in a new, larger paperback format, offers the general reader first a discussion of mythology in late antiquity and the Middle Ages, and then a multifaceted look at the far-reaching role played by mythology in Renaissance intellectual and emotional life.

Jean Seznec (19 March 1905, in Morlaix – 22 November 1983, in Oxford) was a historian and mythographer whose most influential book, for English-speaking readers, has been La Survivance des dieux antiques, 1940, translated as The Survival of the Pagan Gods: Mythological Tradition in Renaissance Humanism and Art, 1953.