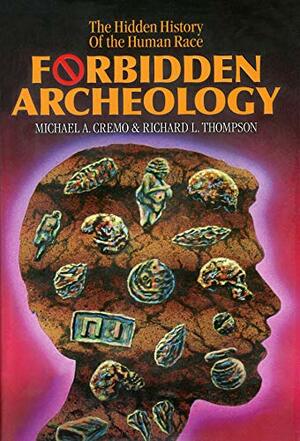 Over the centuries, researchers have found bones and artifacts proving that humans like us have existed for millions of years. Mainstream science, however, has supppressed these facts. Prejudices based on current scientific theory act as a knowledge filter, giving us a picture of prehistory that is largely incorrect.

Michael A. Cremo (born July 15, 1948), also known by his devotional name Drutakarmā dāsa, is an American freelance researcher who identifies himself as a Vedic creationist and an “alternative archeologist” and argues that humans have lived on Earth for millions of years. In case of artifacts allegedly found in the Eocene auriferous gravels of Table Mountain, California and discussed in his book Forbidden Archeology, Cremo argues for the existence of modern man on Earth as long as 30 to 40 million years ago.

Richard Leslie Thompson, also known as Sadaputa Dasa (Sadāpūta Dāsa; February 4, 1947 – September 18, 2008), was an American mathematician, author and Gaudiya Vaishnava religious figure. Historian Meera Nanda described him as a driving intellectual force of ‘Vedic creationism’ as co-author (with Michael Cremo) of Forbidden Archeology: The Hidden History of the Human Race (1993), a work that has attracted significant criticism from the scientific community.