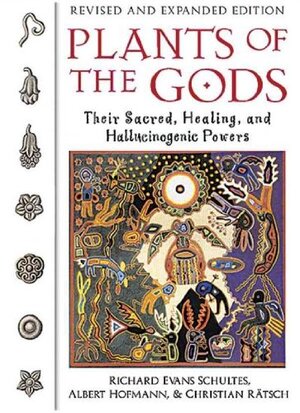 Three scientific titans join forces to completely revise the classic text on the ritual uses of psychoactive plants. They provide a fascinating testimony of these “plants of the gods,” tracing their uses throughout the world and their significance in shaping culture and history. In the traditions of every culture, plants have been highly valued for their nourishing, healing, and transformative properties. The most powerful of those plants, which are known to transport the human mind into other dimensions of consciousness, have always been regarded as sacred. The authors detail the uses of hallucinogens in sacred shamanic rites while providing lucid explanations of the biochemistry of these plants and the cultural prayers, songs, and dances associated with them. The text is lavishly illustrated with 400 rare photographs of plants, people, ceremonies, and art related to the ritual use of the world’s sacred psychoactive.

Richard Evans Schultes (January 12, 1915 – April 10, 2001) was an American biologist. He may be considered the father of modern ethnobotany. He is known for his studies of the uses of plants by indigenous peoples, especially the indigenous peoples of the Americas. He worked on entheogenic or hallucinogenic plants, particularly in Mexico and the Amazon, involving lifelong collaborations with chemists.

Albert Hofmann (11 January 1906 – 29 April 2008) was a Swiss chemist known best for being the first known person to synthesize, ingest, and learn of the psychedelic effects of lysergic acid diethylamide (LSD). Hofmann was also the first person to isolate, synthesize, and name the principal psychedelic mushroom compounds psilocybin and psilocin.

Christian Rätsch (born 1957) is a German anthropologist and writer on topics like ethnopharmacology, psychoactive plants and animals.

Available in digital version in PDF.