The Dionysian way: between mystical inebriation and eternal sacrifice 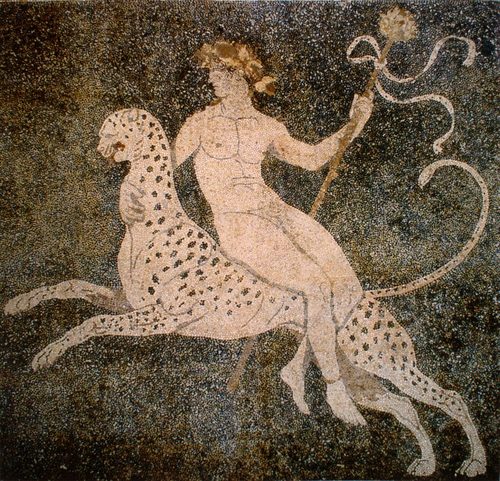 The Dionysian way: between mystical inebriation and eternal sacrifice

Of all the ancient gods of the Greek pantheon, the most multifaceted and endowed with an elusive and complex character is undoubtedly Dionysus, god of the vine, of mystical inebriation and liberation of the senses. Dionysus is the embodiment of the disruptive energy of Nature at the moment of its awakening, the vital and instinctive force behind the ripening of every fruit of Mother Earth, the essence of creation in its perpetual and wild flow.

In the most common version of the myth, Dionysus was born from a relationship between Zeus, ruler of the Olympian gods, and the mortal Semele, daughter of Cadmus, king of Thebes. The jealous Hera, having discovered Zeus’s betrayal with the young princess, took the form of an old neighbour and advised Semele, already six months pregnant with Dionysus, to make a singular request to her lover: that he stop deceiving her, revealing himself to her in his true form and nature. Semele followed this advice and, when Zeus refused to comply, she denied him her bed. The god then, furious, appeared to her in thunder and lightning and Semele died. To prevent the child from dying, the goddess Gaea made fresh ivy grow over the foetus. But it was Hermes who saved the child, sewing it into Zeus thigh where it could mature for another three months, and in due course it came into existence. Because of this episode, but also according to the etymological meaning of the name Dionysus (di-genes) attributed to Apollonius Rhodius, he is called “born twice” or “the child of the double door” 1.

The origin of the name could also derive from the genitive Διός and from νῦσος, hence the nysos of Zeus, the “young son of Zeus”. Other scholars, however, link the etymology of the name Dionysus to Mount Nisa in Helicona, home of the nymphs Nyses, where the god was raised (theos-Nyses, the god of Nisa). In the mountains of Asia Minor, he lived in a cave covered with wild vines and was raised by the Hyades, the woodland nymphs, and by the wise Silenus, son of Pan, where he learned the art of divination and acquired much wisdom. Until he reached maturity, Dionysus always had to hide from the wrath of the jealous Hera, disguising his appearance by wearing female clothing 2. Furthermore, Dionysus is also an androgynous figure, a hybrid god with a multiform nature, male and female, animalistic and divine at the same time. He embodies the primordial and instinctive spark present in every living being, a violent and impulsive force within man himself, a path to mystical asceticism. In fact, the young god is always portrayed with his head framed by ivy leaves while holding the tirso (a stick with a bunch of ivy or vine leaves at the end like a pine cone) or while holding a sacred cup, sometimes surrounded by phallic symbols (he is also the god of fertility) and by ferocious animals such as the leopard, the bull, the lion or the goat 3.

Greek literary tradition points to Dionysus as a god who came from the north and was worshipped in the lands he crossed before arriving in Greece. According to the historian Marcel Detienne, Dionysus is the foreign god par excellence, since he came from Thrace, where he was worshipped 4. A strong affinity with the Dionysian cult is also found in Anatolia with the orgiastic and vegetative rites in honour of the Thracian god Sabazio, son of Rhea and descendant of Zeus and Persephone 5. Finally, the scholar Giorgio Colli maintains that the origin of his cult is to be sought in the Minoan-Mycenaean world through the initiatory myth of the labyrinth of Minos, Ariadne and the Minotaur 6. It was in Asia Minor, in the company of the nymphs, that, according to legend, the god became the unwitting creator of the mythical alcoholic beverage, wine.

Traditionally, however, Dionysus is shown to us as the god of the vine and of alcoholic intoxication, according to the poetic sources of the Alexandrian and Roman periods, but the ecstatic intoxication described in the Dionysian rites is very different from alcoholic intoxication: alcohol, as we know, is a depressant of the central nervous system and does not cause, except in extreme cases, hallucinations. Dionysian ecstasy, on the other hand, is characterised by exaggerated excitement, great physical vigour, hallucinatory states, mystical madness and mystical identification with the divinity. The Indo-European origin of Dionysus has led some authors to see fermented drinks, based on barley or other cereals, as the psychoactive Dionysian agents that preceded grape wine. From its origins, in fact, this divinity was associated with psychoactive plant gods, with little allusion to the role the god should have had with the origin of the vine and wine 7.
Homer himself, who frequently evoked the drink and its intoxication in his works, never indicated Dionysus as the giver of the plant to men: for example, the wine that Ulysses brought on his expedition to the Ciconians on the Thracian coast was not a gift from Dionysus, but from Maron, priest of Apollo (Homer, Od., IX, 196-198). In Locrida and Aetolia, legends attribute the origin of viticulture to Orestes, son of Deucalion (the ‘Noah’ of the deluge tradition in Greece); Orestes gave birth to Pythius (‘the abundant’) who in turn gave birth to Oineus (‘the vine-dresser’), whom epic tales crown king of Calydon (Maxentius, 1969).
For Jacque Brosse, in the Dionysian context “wine would be but the culmination of a series [of intoxicants], starting with the divine nectar and passing through the sacred potion of the Bacchae” 8.
The figure of the Indo-European god, and his origins in particular, refer to the ancient cults of Soma, the sacred drink consumed by Hindu priests and described in the hundreds of hymns of the Rigveda, the first text of Indian religious literature, compiled between 1500 and 1200 BC.

In 1968, the American ethnomycologist Gordon Wasson, in his book “Soma: Divine Mushroom of Immortality”, hypothesised that this drink was produced from extracts of Amanita muscaria, the red and white mushroom with hallucinogenic properties whose presence is testified to in the magical-religious contexts of all Eurasian cultures 9. Robert Graves, a poet and expert on classical culture, discovered that the initials of the supposed ingredients of ambrosia (“the food of the gods”) form the Greek word for mushroom; and the same happens when the initials of nectar, “the life-giving drink of the gods”, are combined. He also discovered similarities in the divine attributes of Dionysus, the Greek god of intoxication, and Tlaloc, the pre-Columbian Mexican deity of magic mushrooms, who also shared the toad emblem. The festival in honour of Dionysus, during which ambrosia was eaten by a select few, was held in October, the peak of the mushroom season 10. From what has been said so far, it is possible that in the early Dionysian cults, in order to achieve ecstatic vision and a mystical trance, hallucinogenic mushrooms were used, probably mixed and left to macerate with alcoholic beverages such as beer or wine.
This secret Dionysian mushroom cult, again according to Robert Graves, was later passed on to the Achaeans of Argos by the native Pelasgians. The Centaurs, Satyrs and Maenads of Dionysus apparently ritually consumed a spotted mushroom called agaric moscario or ovolaccio (Amanita muscaria), which gave them enormous muscular strength, erotic power, delusional visions and the gift of prophecy 11.

Specifically, the Maenads (Μαινάδες from μαίνομαι “in fury”) were the chosen priestesses of the god, practising his orgiastic cult during a state of mystical delirium. Also called Bacchae, as they were likened to the Roman god Bacchus, they were covered in fawn or fox skin, called nebris, crowned with ivy leaves and sometimes had a tattoo in the shape of warp and weft on their limbs. Wielding the tirso, a stick adorned with ivy, they ran over the mountains during ritual festivals, to the deafening sound of cymbals, timpani and flutes, dragging or holding a fawn to their breast 12. In addition to the limbs, the faces of Maenads were also tattooed to celebrate woodland orgies, which would explain the name of Penelope (Πηνελόπη “with a net over her face”), wife of Ulysses, as an appellation for the orgiastic goddess of the mountains and the connection with the Dionysian cult 13.

During the orgiastic rite, once they had reached the height of their ecstatic delirium through the consumption of hallucinogenic mushrooms mixed with wine, but also through the chewing of ivy leaves, the Maenads would rip open the fawn with their bare hands and eat its flesh raw. This ritual sacrifice allowed the priestesses to incorporate the vital essence of the god Dionysus into themselves, a true theophagy 14.
Finally, Dionysus is both Zagreus (Zαγρεύs), the great hunter, and Nebrodense, the prey, as he resembles the fawn (νεβρώδηs). The ritual quartering by the priestesses was also suffered by Dionysus himself, but also by Morpheus, the god of dreams, and Pentheus, mythical king of Thebes 15. As sacred king, Dionysus was killed by a thunderbolt (i.e. hit by the bipen) in an oak forest during the summer solstice and then dismembered by the Maenads, followers of the bull cult 16.

The story of Semele, the mother of the god, seems to recall the methods adopted by the Hellenes in Boeotia to put an end to the traditional sacrifice of the sacred king: Olympian Zeus asserts his power, takes the sacred king under his protection and annihilates the goddess with the thunderbolt. Dionysus thus becomes immortal, having been reborn from an immortal father. Semele was honoured in Athens during the Lenee, the Feast of the Invaded Women, where a young bull, representing Dionysus, was cut into nine pieces and sacrificed to the goddess; one piece was burned and the rest devoured by the faithful 17. The dismemberment and recomposition of the god represents the cosmic myth of the eternal renewal, death and rebirth of Nature. The repetition of this ritual (i.e. the killing, dismemberment and consumption of the corpse) guarantees fertility and abundance. Cannibalism is a cultural behaviour based on a religious view of life. The world continues its cyclical renewal only through death, which is necessary for rebirth to occur. Feeding on the gods becomes a symbol of the victory of life over death, of rebirth, fertility and abundance.