The invisible correlations between man and his territory 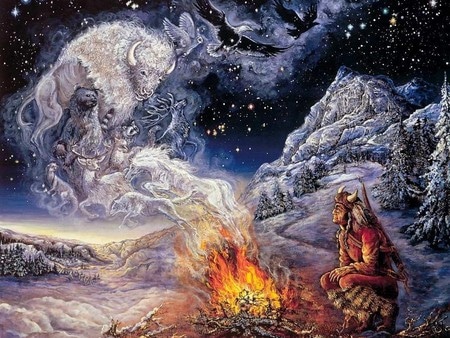 The invisible correlations between man and his territory

This profound law of imperishable analogy has always characterised the thought and spirituality of the ancients. The Egyptians, for example, considered Man to be the summary of the whole Universe, the embodied reflection of the Cosmos with particular energetic signatures, such as those present in a plant or an animal. According to the physician and alchemist Paracelsus, everything in nature bears a sign, a precise signature left by the Creator that reveals their invisible qualities.
This particular signature leads man, at the moment of his birth, to an analogical connection with a certain territory, characterised by its own flora and fauna, so that an occult kinship is established between man and his environment, i.e. invisible sympathetic currents are formed between them. At the moment of birth, astral energies from the stars are imprinted on us, giving us a very precise energy signature that resonates with the place of birth.

Thus a particular place, with its specific geomagnetism, will attract animals that will be in sympathy with it, as can be seen, for example, at Edfu with the hawks, whose name is Horo, the hawk god, or for the vultures at Nekheb, today Al Kab, where these animals are very present. The animal thus becomes the living expression of the place. Humans who are born in that area have sympathetic links with the geodetic conditions that attract these animals, and so a close bond is formed between place, man, animal and plant 1.

This fundamental link, once consciously recognised by modern man, establishes beneficial correspondences, insofar as the celestial conditions that constantly inform that place are respected. In fact, in every place a dense web of sympathies is established, a network of electromagnetic energies that come together in a subliminal entity, the God of the place, of which an animal or vegetable symbol is the most obvious and striking sign. At other times this symbol may be an inanimate thing, a single part of a certain animal (paw, head, claws, etc.) or a hybrid entity composed of two or more animals, characteristic of the geomagnetism of the place.
Thus the animal, the plant or the inanimate thing are taken as symbols of a given place, indicating the subliminal conditions that reign in that corner of the earth and that are in close relation to a given sky, to flora and fauna that are adapted to those conditions and to men who possess certain signatures.

The totem is a class or species of animal, vegetable or inanimate being that forms the object of worship of a clan, since it thinks it has a substantial identity with the totem symbol. The totem of the clan (quite different from the individual totem and the totem receptacle of the soul) is a bearer of natural affinities, rhythms and psychic states, which establish an animic link between it and human beings 2. The totemistic principle lies in the fact that an individual, a family, a clan can find typical affinities in the animal or vegetable kingdom, whereby the rhythms and psychic nature correspond to their own. There is thus established in that place an animic similarity, a psychic community of vital forces between all the inhabitants of the place, which generates the God of the place: the Eggregora of the territory. Each territory can be marked by one or more Deities according to the local geomagnetism and the spiritual traditions of the tribe or clan that inhabits it. Each tribe or family clan has adopted as its totem an animal or plant whose rhythm and character are in affinity with their essence and way of life. This gives coherence to their habits and to the expression of their tendencies, awakening an intuitive principle that allows them to know the timing of beneficial and malefic influences in the great cycle of Nature 3.

In Egypt, for example, each city had its own Neter, the City Deities, whose names protected and recalled an animal or plant. This animal was the symbol of an aspect of the city’s Neter, as for example was the cat for the city of the goddess Bastet, Per Bastet (“The House of Bastet”, in Greek Bubasti); the ibis for Khemnu (in Greek Hermopolis) the city of the god Thoth. In Italy, on the other hand, the symbolic cult of their totems is still alive in many cities, almost unconsciously and through festivals and rituals that are now Christianised and modern. For example, the city of Turin, founded according to legend by an Egyptian prince Pa Rahotep in 1523 BC and in which he introduced the cult of the god Apis (a god with the appearance of a bull), has the bull as its animal totem. While for the city of Milan, founded by the king of a Celtic tribe Belloveso in the 6th B.C., it is the half-breed sow, the sacred animal and symbol of the goddess Belisama for the Celts. Finally, the city of Venice, founded by the Venetian tribe around the 8th century BC, a race that according to Greek authors came from Paflagonia in central-northern Anatolia, has as its totem the winged lion, the symbol of St Mark the Evangelist, the patron saint of Venice.

The profound sacredness of the totemic doctrine is also characterised by laws and taboos, specific prohibitions concerning diet and sexual life that every member of the Clan must abide by in certain places or periods of the year. These taboos, such as the prohibition to eat one’s own local and individual totem animal, are fundamental laws to maintain the energetic balance of the Clan and of the individual himself, so that his rhythm and habits are always in resonance with his totem. For the ancients, their totem animals or plants were real brothers and sisters, close relatives to be safeguarded and protected. However, the totem should not be confused with the God of the place, since the totem only represents the character of its animic forces and certain aspects of its function, but both are the same archetypes present in a given territory. It is no coincidence that a tribe or clan rarely moved or migrated from their native habitat, in which they established their roots and subtle relationships with the living beings of the place.

Nowadays, however, the disproportionate increase in large, completely anonymous cities, the completely non-existent relationships between inhabitants and the increase in expatriates, who no longer have an energetic relationship with their place of origin and the place where they live, render these places completely devoid of their natural geomagnetism, causing the disappearance of their local deities. All this also manifests itself in the disappearance of many characteristic animals and plants, almost completely cancelling out the particular biodiversity of the place. Man, forgetting to honour and respect these inner and outer energetic conditions, has preferred to abuse them, turning against Mother Nature and her animal, vegetable and mineral brothers and sisters.