Peter Pan, the psychopomp of Neverland 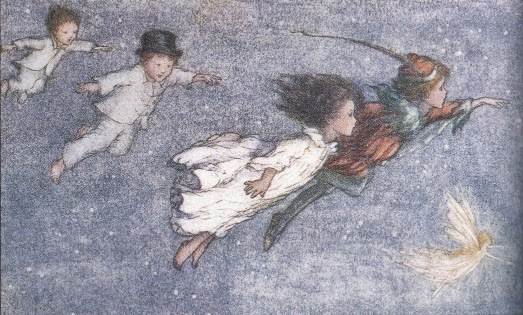 Peter Pan, the psychopomp of Neverland

The character of Peter Pan was made famous and popular among adults and children alike thanks to the well-known animated films produced by Walt Disney starting in 1953 with “The Adventures of Peter Pan”. But the origins of the story of the “eternal child” derive from the imagination of the British writer and playwright James Matthew Barrie, successfully narrated in literary works and plays. Peter Pan made his debut way back in 1902 in the Victorian novel “The Little White Bird”: in the chapters entitled “Peter Pan in Kensington Gardens”, Peter Pan is described as a child of just seven days old who decides to fly out of his bedroom window to escape the human condition and return to Kensington Gardens in London. The ‘child who did not want to grow up’ befriends the animals and creatures of the Little People, especially the Fairies, who populate the gardens when they are closed to the public. In the course of the story, Peter Pan forgets his human nature and hopes to become a bird again, but he cannot. In Barrie’s myth, all the children are reincarnated bird spirits from Kensington Gardens, known as ‘Bird Island’ (later called Neverland), who slowly forget their former nature as they grow into adulthood 1.

Since the Palaeolithic era, the human soul has always been represented by ancient men in the form of a bird, capable of detaching itself from the material world and flying free into the spiritual realms. For the ancient Egyptians, the soul of the deceased, defined as “Ba”, took the form of a bird with a human head and returned to rest on the branches of the sacred Sycamore tree, a symbol of the reincarnation cycle of the soul, located on Lake Turquoise 2.

In Celtic beliefs, the Other World is called Avalon, a sacred island full of wild apple trees, a symbol of immortality, where the priestesses of the Mother Goddess and the Sidhe or ‘Little People’ dwell 3.

So Peter Pan, not yet an adult, remembers that he was a bird and turns into “a strange little being half human and half bird”. Under the guidance of the wise man of Serpentine Island, the raven Solomon, Peter Pan learns to fly, play the flute and live happily. In the Celtic world, the raven is a psychopomp, a messenger between the material and spiritual worlds who accompanies and protects souls in the Other World, like the role played by the raven Solomon in Kensington Gardens 4.

The genesis of the eternal ‘lost boy’ has its origin in a traumatic event in the life of author J. M. Barrie: at the age of six, his older brother David died in an ice-skating accident the day before his fourteenth birthday. The trauma significantly devastated the mother, who shared a very deep and close relationship with her son David, leading her to withdraw into herself. To help her overcome the trauma, James decided to assume the identity of his brother David, wearing his clothes and even whistling the way he did. In doing so, however, James lost his true personality forever and his ego ‘died’ and he never really grew up 5. Peter Pan is a creature of dual nature who can never grow up, the archetype of the child who has been forced to lose himself to make room for another nature (his brother David) and to live in an enchanted world in search of his ‘lost shadow’.

Peter Pan is also the literary representation of two symbologies: ‘Peter’ or the philosopher’s stone, the elixir of long and eternal life, and ‘Pan’ or the figure of the god Pan, the ancient Hellenic divinity of nature. The name Πάν comes both from the Greek word paein, meaning ‘to graze’ – and in fact Pan was the shepherd god, the god of the countryside, forests and pastures – and from πᾶν, meaning ‘all’, or the spirit that resides in all natural creatures. The god Pan is depicted as a faun, half human and half goat, son of the god Hermes and the nymph Driope. According to Homer, his mother Driope abandoned him soon after his birth because of his terrible appearance. His father Hermes then picked him up and took him with him to Mount Olympus to amuse the gods, causing Dioni’s hilarity 6 .Pan is a powerful god with a half-divine, half-wild nature, known for his strong sexual connotations under the epithet ‘The Great Fertiliser’.

Lord of nature and unbridled fecundity, together with nature spirits, satyrs and nymphs, he plays his flute in bucolic festivals generating life, crops, harvests, every species of plant, flocks and wild animals. Peter Pan himself was abandoned by his mother, he rides a goat, plays the flute and “runs after” the fairies, confirming the same symbolic attributes of the predecessor god Pan. The god Pan is the Lord of the nature spirits, and in the same way as Peter Pan he governs the flower fairies in Kensington Gardens.

The character of Peter Pan will evolve over the years to take on a different personality from the one described in the first novel. A year after the publication of “The Little White Bird“, on 27 December 1904 author J.M. Barrie debuted with a play centred solely on the figure of Peter Pan entitled “Peter Pan, or the Boy Who Wouldn’t Grow Up”. This story was later enlarged and turned into a novel published in 1911 with the title “Peter and Wendy”, then “Peter Pan and Wendy” and finally simply “Peter Pan”. The plot is set in Neverland where Peter has great adventures with different characters: the Darling family, the nanny dog, the lost shadow, the mermaids, the pirates, the lost children, Captain Hook and the Crocodile.

The new Peter is a teenager dressed in dry leaves (similar to a green spirit) who flies around London looking for lost children who fall out of prams when the nannies get distracted. If the children are not claimed within seven days, Peter Pan flies them to Neverland, a Dionysian island of fun, impulsiveness and constant disorder. Constantly searching for his shadow, his soul, Peter Pan is a selfish, narcissistic and apathetic child who cannot feel any affection or empathy for anyone, and even forgets the name of everyone who has ever been near him. Intent on escaping the responsibilities of adult life, for Peter life is one big game. Peter Pan therefore takes on the characteristics of a psychopomp “demon” with a hermetic nature, charged with accompanying dead children to the afterlife or Neverland, following the same nature as the god Pan, the son of Hermes. In the first pages of the book “Peter Pan”, the author recounts that “when a child died, Peter accompanied him along a stretch of road so that he would not be afraid” 7. Tied to his role as spirit guide, in “Peter Pan in Kensington Gardens'” he digs the graves for two innocent children who fell out of their prams without anyone noticing, becoming the guardian of the cemetery of unclaimed children.

In conclusion, Peter Pan is the literary representation of James Hillman’s archetypal Puer Aeternus, a child god who will remain an eternal youth always in conflict with his dual inner nature, dead and reborn like the god Pan and Hermes, a psychopomp who accompanies innocent souls to a realm among the stars of the Milky Way and reachable only at dawn.